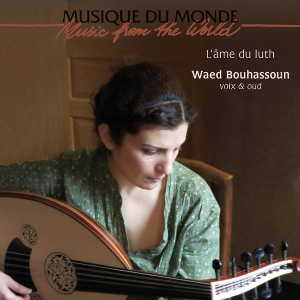 In the latest instalment of Buda Musique’s wonderful Musiques du Monde series, which has been a part of the label for over two decades, the attention is turned to Syria and its legendary school of oud playing.

One of the young guard of Syria’s classical music scene is Waed Bouhassoun. Having studied the oud at the High Institute of Music in Damascus at a time when it placed a heavy focus on Western classical music, Bouhassoun’s own style reflects the eclecticism of her teaching. Her sound is clearly rooted in the Syrian classical tradition, but this by no means restricts her playing: subtle influences from Egypt, Lebanon, Europe and elsewhere can be heard.

L’âme du Luth is a completely solo album, featuring only Bouhassoun’s oud and voice, and it really is beautiful. All the music included is written by Bouhassoun herself, and the poetry is sourced from around the Islamic world and from the 7th century to the modern day. The atmosphere throughout is introspective and calm, but from this foundation the mood delicately shifts between joy and sorrow. Both voice and oud are performed with the utmost respect and each compliments the other perfectly, each alternately working with and weaving through the other. The album’s two instrumental pieces, modelled on unmetred taqsim, work in complete sympathy to the rest of the album and are just as subtly emotional as the songs.

The production on this album is wonderful; it avoids the over-the-top reverb that gets slapped on many of this style of recording – the light reverb that is used is just enough to accentuate the music and give each note room to breathe. The liner notes that are included are okay, but most of the pieces’ titles are given in English and French only (as opposed to the ‘correct’ Arabic title) and the English translations of the texts come from the Arabic via French, allowing for deeper meanings to be lost-in-translation twice.

With L’âme du Luth, Waed Bouhassoun has created an impressive album, one that is befitting of the Musiques du Monde series, and one that announces her as a master of her style.
Posted by JimHxn
Email ThisBlogThis!Share to TwitterShare to FacebookShare to Pinterest
Labels: Album Review, fRoots, Syria
Newer Post Older Post Home