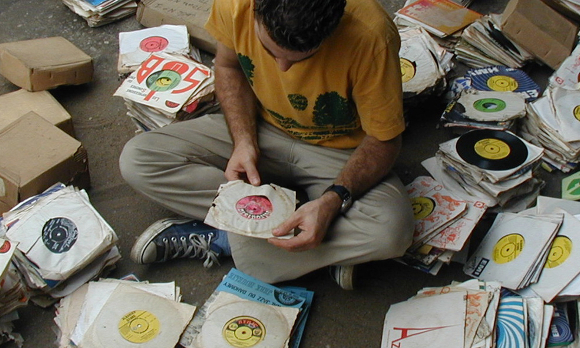 An iconic record label needs a signature sound, a unifying element that makes all its releases stand out as its own. Analog Africa undoubtedly has that. Its records are unmistakable, whether they’re from Cameroon, Cape Verde or Colombia. They all have that distinctive blend of funk, soul and local traditions with a gloriously chaotic analogue charm – Analog Africa’s records always represent the epitome of African groove.

It’s all down to a man with impeccable taste and a ridiculous travel schedule. Samy Ben Redjeb crafts each album himself, from the sequencing and licencing to writing the sleeve notes. His gift for curation has its roots in his teenage years in Tunisia. “When I was working in bakeries and coffee shops, I made mixtapes. I drew the cover myself and I would earn maybe 10 cents a cassette. That taught me how to combine the songs so they flowed nicely together. I think that was the beginning.”

He went on to be a diving instructor, a hotel DJ, an airline steward…anything that allowed him to travel (and listen) widely. Time in Senegal opened his ears to the world of Sub-Saharan music, and he ended up hopping the continent at every opportunity, gathering experiences and records at every stop. It’s a habit he keeps to this day. While in Zimbabwe, he realised he could give this music the wider audience it deserved. After the first Analog Africa record, by wha-wha band The Green Arrows in 2006, there was no looking back.

Each album explores a scene or artist from anywhere across Africa and Afro-Latin America, but they’re all from the 60s to the 80s, building a snapshot of all things funky in that golden period. What is it about that particular sound that excites Redjeb? There’s a clue in the label’s name: “It’s the quality, the way it was recorded live, the analogue set-up. Often the bands didn’t have so much money; they just didn’t have the equipment. They were doing bricolage. If a valve went in an amp, they wouldn’t have the exact replacement, they would improvise. You don’t know how they made that sound, you can’t recreate it.”

He’s not a rabid crate-digger hunting for only the most obscure artefacts, though. “People think I’m all about the really rare stuff, which is not the criteria at all. Some of the songs I love most have been huge hits. For me, it just has to be interesting. It has to make me curious.” That philosophy extends to his regular Analog Africa DJ sets. The stuff he plays is obviously top-notch, but don’t just expect the back-catalogue: “Generally I play the stuff that I’m going to release. I don’t tend to play much of the music I already have on my label. Just because I heard it so much and I’m tired of it!”

It’s no wonder there’s always another album on the horizon and multiple projects happening at once. There are forthcoming releases from Ghana, Somalia and the Brazilian Amazon, and you just know Redjeb has a million other exciting things up his sleeve. With a sound as recognisable as Analog Africa’s, quality is most definitely assured.
Posted by JimHxn
Email ThisBlogThis!Share to TwitterShare to FacebookShare to Pinterest
Labels: Article, Germany, Music Business, Songlines Magazine, Tunisia 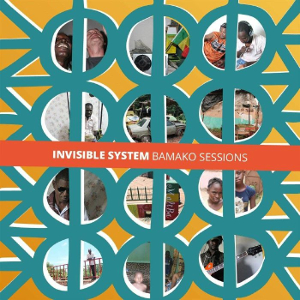 Invisible System, aka producer and multi-instrumentalist Dan Harper, is best known for his heavy dub-rock takes on Ethiopian music, drafting in huge names such as Mahmoud Ahmed, Justin Adams and Juldeh Camara.

For this album, Harper used his usual technique: set up a studio, bring in a rotating cast of local musicians to jam, and dub the results. This time though, he’s back in Mali, where he made his first recordings back in 1999. His guests are solid as always – Songhai bluesman Sidi Touré is probably the best-known and provides some cool guitar parts – and kora, balafon and ngoni are all well represented. It’s all instrumental and all improvised.

Malian dubtronic fusions are not exactly new, and Bamako Sessions just isn’t as adventurous as some of Harper’s earlier work, especially 2009’s fantastic Punt. The tracks all sound basically similar and a little repetitive; there’s no psychedelic dub-outs, it’s all rather low-key. There’s nothing bad about it, but there’s nothing exciting either. Invisible System has proved capable of making intense and interesting fusions, so it’s disappointing to hear an average album in a style where other artists have flourished in the past.
Posted by JimHxn
Email ThisBlogThis!Share to TwitterShare to FacebookShare to Pinterest
Labels: Album Review, Mali, Songlines Magazine, UK
Newer Posts Older Posts Home
Subscribe to: Posts (Atom)