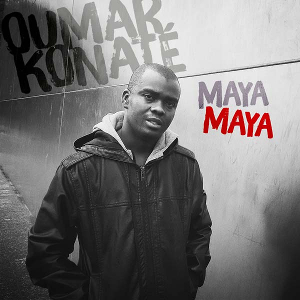 Hailing from Gao and living in Bamako, Oumar Konaté is part of the new generation – the Young Malian Artists; musicians taking conflict in stride and making music with an international gaze, while never leaving their traditions out-of-reach.

Since his first album, 2014’s Addoh, with its large band and numerous guest musicians, Konaté has concentrated his group down to a trio: himself on guitars and vocals, Cheick Siriman Sissoko on bass and Makan Camara on drums. The album’s liner notes state that the group is “a power trio on the level of Cream or Band of Gypsies”. What a claim. It’s one that’s basically impossible to live up to despite the group’s proficiency, although Hendrix’s legacy can be heard very clearly in Konaté’s solos.

Over the entire album, the Malian-ness (Malinity?) seems to decrease: for the first five or so tracks the sound is very rooted in the Mandé styles, but by the end the tracks are straight-up rock. The two aren’t blended as well as they could be, leading to disappointing ‘what ifs’. A low-level reggae does permeate throughout to good effect, however.