Various Artists - The Rough Guide to the Music of Palestine 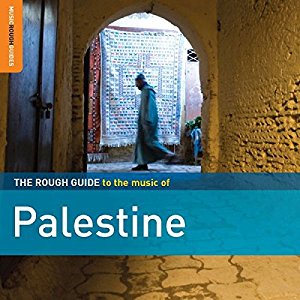 What a pertinent release. With the Israel/Gaza conflict experiencing a particularly bloody recapitulation, the World Music Network continue their fantastic series of Rough Guides with the Rough Guide to the Music of Palestine, focussing on the often overlooked culture of the troubled region.

One might expect this album to be chock-full of Palestine’s particular brand of Levantine classical music and Egyptian-inspired orchestral works that are seemingly ever-present in the Arabic world, but, while some great examples of these are included, they sit amongst a diverse line-up that includes hip-hop, punk, pop, reggae and a fair amount of jazz. Full credit should be given to compilers Nili Belkind and Nadeem Karkabi for managing to squeeze in so many styles without any sounding out of place or the album feeling too muddled. With such a range of genres, it’s quite difficult to choose particular highlights, although Sanaa Moussa’s indie-acoustic tribute to Ottoman-period Palestinian songsters on 'Wea’younha' and the driving modern jazz of Michel Sajrawy’s 'Tojann' stand out in particular.

As with most recent Rough Guide releases, the Music of Palestine comes with a bonus album – Reflections Of Palestine by buzuk player Ramzi Aburedwan. Mixing Arabic classical music with jazz, tango and French elements, this bonus is an appropriate and complimentary addition to the main compilation.

The collection’s attention to the less ‘traditional’ side of Palestine’s musical spectrum can be seen as a positive, humanising tool at a time where most images we see of Palestine are of the ruined buildings and wounded civilians of Gaza. It also serves as a reminder of some of the great culture that may well be disappearing before our eyes. Even disregarding the timeliness of such a release, however, it’s still a brilliant and varied compilation from a country that is not necessarily famous for its musical output.
Posted by JimHxn
Email ThisBlogThis!Share to TwitterShare to FacebookShare to Pinterest
Labels: Album Review, Compilation, fRoots, Palestine
Newer Posts Older Posts Home
Subscribe to: Posts (Atom)