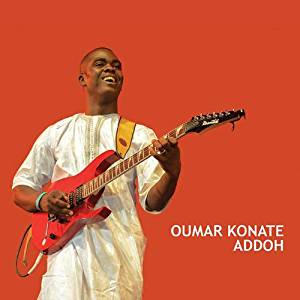 With Addoh, his debut album, guitarist and singer Oumar Konate seeks to place himself amongst the ever-growing pantheon of Mali’s global stars. Having worked as a backing musician for Vieux Farka Touré, Sidi Touré and Khaira Arby, Konate takes things in his own direction, mixing the guitar styles of northern Mali with rock, funk, reggae and more, with some pieces even bringing to mind Senegalese mbalax.

Although the variety of styles presented on the album generally works in its favour, Addoh seems at its weakest when trying out reggae: the opening track is based on a cool reggae groove and misses the mark a bit. After that though, the album begins to pick up, and its second track ‘Bisimillah’ is probably the best of the lot, with Konate’s distorted guitar providing dramatic exclamations above a brooding blues.

Konate also introduces some interesting guests to his band: current hot-property Sidiki Diabaté brings his kora to the duet ‘Terya’ to good results and the American-Ethiopian horn section of Debo Band, though they feel somewhat underused.

Addoh isn’t a great album, but it’s certainly a good one, and one that shows promise and some exciting directions. Konate is one to keep an eye on.
Posted by JimHxn
Email ThisBlogThis!Share to TwitterShare to FacebookShare to Pinterest
Labels: Album Review, Mali, Songlines Magazine 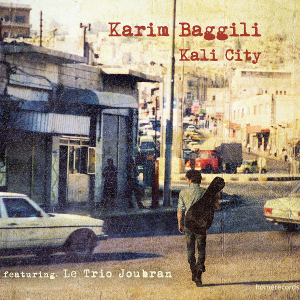 A Belgian of Yugoslav-Jordanian heritage, Karim Baggili has so far made his name through his blend of flamenco, tango, South American folk and Western and Arabic classical music. In this, his fourth album, Baggili gets in touch with his Levantine roots and puts down his usual Spanish guitar to return to the oud. Kali City is Baggili’s second major exploration into oud music (all self-composed), and to kick off the album, he invites the Palestinian oud trio Le Trio Joubran to join in.

The first five tracks of the album are moody duets and trios of oud between Baggili and Le Trio, with subtle percussion. Here, Baggili’s skills as both an oud player and composer can been heard as the various oud parts swirl together and swim apart, with tango and flamenco teasing their way out of the Arabic melodies.

Given the high status of these guests and their prominence in the album’s press, it’s a little strange that the album actually reaches its peak once they have taken their leave. They hand over to Baggili’s ‘Arabic Band’ to support him, and with violin, bass, kawala flute, drums and percussion, as well as Arabic vocals provided by Samia Sabri and Baggili himself. This ensemble seems to create a more exciting sonic landscape – a bustling urban environment rather than a stark desert scene. The album’s title track and the piece 'Arabic Circus', both from this latter half of the album, are probably the most enjoyable of the set, bringing to the mix flavours of jazz, classical music and even the occasional aroma of the 19th century Parisian café.

Karim Baggili does seem to have announced himself as just as proficient on the oud as the Spanish guitar and makes an entertaining album while he’s at it. It’s just a bit of a shame that the collaboration with Le Trio Joubran doesn’t quite delivery.