First published on Musika.uk.com in February 2013. 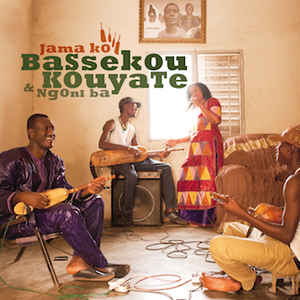 For all the trouble Mali faces in its current situation, one could forgive a country becoming artistically subdued. But when you’re talking about one of the most musical nations on Earth, this simply isn’t an option.

Recorded during the March coup d’état, Bassekou Kouyate & Ngoni Ba’s third album pulses with the sounds of resistance. Almost every track on the album is a call for peace or a story from the history of the Mali Empire that preaches togetherness and solidarity in struggle.

Jama Ko is probably the most varied of Kouyate’s albums in terms of overall sound. Produced by Jay Rutledge and former Arcade Fire drummer Howard Bilerman, the album certainly seems to have a more rock-based sensibility than Kouyate’s previous fare. The opener and title track ‘Jama Ko’ certainly represents this, starting with a very un-Mandé-like chord sequence and featuring a blistering wah-heavy and distorted ngoni solo from Bassekou while also retaining a typically infectious Bambara groove and the majestic and soaring vocals of Amy Sacko.

Although the album is chock full of guest musicians – often a bad sign – most seem to gel well with the band. As well as legendary Malian musicians such as Kassé Mady Diabaté, Lassana Diabaté and Zoumana Tereta, the album also showcases younger talent from the country: one of the highlights of the album is the hypnotic ‘Mali Koori (Cotton Song)’, sung by Tereta and featuring the balafon (xylophone) of rising star Basidi Koné. One track does seem to suffer from collaboration, however – ‘Wagadou’, a brooding track is leant a pretentious and artsy post-rock atmosphere by the piano and glockenspiel of Mocky.

Yet the most heralded collaboration on the album is that with American blues singer and guitarist Taj Mahal on the track ‘Poye 2’. Having previously worked with Malian musicians including kora master Toumani Diabaté, Mahal brings musical sensitivity to Kouyate’s piece while the ngoni maestro’s ability to bend towards the blues creates one of the most effective West African blues experiments to date. It’s also a rare offering of Kouyate’s vocal abilities, which suit the track’s half-spoken jam vibe perfectly.

Kouyate shows willingness to fuse Bambara music with more than American styles, however. Possibly the most stylistically striking track of the album is ‘Kele Magni’ featuring singer Khaira Arby, which revolves around a sound which is noticeably Saharan. Hailing from Timbuktu in the north of Mali, Arby has experienced first-hand the effect of the Tuareg rebellion and subsequent invasion and takeover from Islamist groups including al-Qaeda. Music is now banned in the north of Mali. Arby and Sacko duet on this track renouncing the war, and extoling that Mali should be ‘inseparable, from Kidal in the east to Kayes in the west’.

Bassekou’s latest album is his most musically progressive and perhaps his most enjoyable, although purists may balk at some of the directions taken. But his album is more than just a musical offering, it’s a message from a griot to his fellow countrymen and to the world: Malians must remain united and work together for peace in both the north and south of the country.
Posted by JimHxn
Email ThisBlogThis!Share to TwitterShare to FacebookShare to Pinterest
Labels: Album Review, Mali, Musika.uk.com
Newer Posts Older Posts Home
Subscribe to: Posts (Atom)