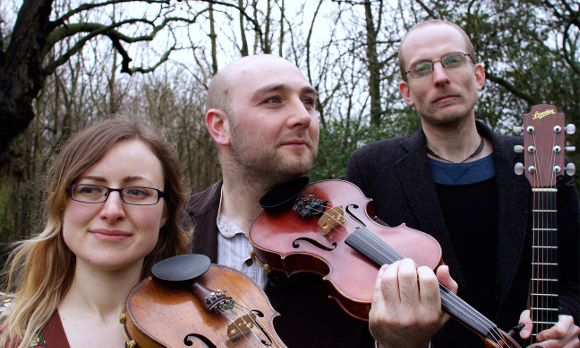 There are worse surroundings in which to discover new music than a cosy pub in the middle of Lancashire, filled to the brim with folk music experts. But it was there in the Holden Arms in the village of Haslingden that I first saw Alma perform, as part of the 2016 English Folk Expo (EFEx).

They played at the invitation of the EFDSS, and from the beginning of their set, it was obvious that their choice of Alma was spot-on. A trio of two fiddles and a guitar, the band were completely tight from the first note and continued to take their audience on a whistle-stop tour of European and Middle Eastern folk dances.

Alma are fiddlers Emily Askew and John Dipper and guitarist Adrian Lever. All three are highly experienced and knowledgeable in English folk, but Alma’s music is perhaps best described as instrumental folk from around the world, performed with an English accent. They still explore English tunes, but their repertoire also reaches much further, with pieces from France and Sweden, all the way to Bulgaria, Tunisia and Iraq.

The decision to expand from our isles was inspired by Emily’s participation in the Ethno summer schools: “people came from all over the world and shared their folk music. Being inspired by their music directly and live, it made me want to hear more and delve into it.”

While the traditions from which Alma’s tunes originate are usually very clear, the sensibilities with which they are performed are distinctly English. It is hard to define how, exactly. It’s in the small things: the way the melodies are ornamented and the rhythms are felt, and how the harmony and interplay is constructed.

But it cannot be said that Alma don’t treat these tunes with respect. The background of each piece is researched before arrangement. John: “It’s really important to us that it’s not considered pastiche. It’s important to know what each tune does. With all of the stuff that we play, we know about the dances concerned and how the music works for that dance.” This respect and research can be heard in the music, and stops it from sounding like Brits on holiday performing cheap knock-offs.

As important as the group’s repertoire is their instrumentation. The concept of the fiddle is at the heart of the group: the project came from Emily in 2014, with the idea of exploring the disparate traditions of fiddles and similar instruments around the world. Around a year later, the trio was formed. This set-up works perfectly for their music, giving each musician a vital role while still leaving creative room to manoeuvre. Adrian says, “we work quite intuitively and through improvisation. We try to be three voices, as much as we can be,” and indeed, their techniques end up sounding like musical conversations. It’s not uncommon for pieces to branch out into three distinct countermelodies, each player making their own integral contribution to the melodic whole.

With their line-up finalised and their sound taking shape, it was time to record their debut album. But nothing’s that simple. “We had a bit of a nightmare with it!” recalls John, “We recorded it all in September 2015 and when I came to edit it, I was listening through to individual tracks thinking ‘that’s weird, there’s BBC Radio 4 all over there’ and then I found there was taxi radio on another track, and disco radio on another, all at the same time. It was nutty!”

While an avant garde radio mashup may have turned some heads, it wasn’t Alma’s sound. After a refund from the recording studio, they ended up re-recording the whole thing in a living room bedecked with duvets, carefully positioned around a sofa and with Adrian stood in the fireplace. It was this recording that became Varieties, released on RootBeat Records in July 2016.

Now with one album under their belt, they’re already looking to the future. Their showcase at EFEx went down a storm and has already seen them added to the 2017 Shrewsbury Folk Fest and Towersey Festival line-ups, with more big festivals to be confirmed. A second album is already on their minds too. “We’re still in our early stages – we’d only just become the trio when we started recording the debut album,” says Adrian, “so we’re looking forward to finding different ways of arrangement and sound to see where we can take it.” These different ways include adding songs to their repertoire. This seems like rather a big shift, but the ideals behind the group remain, as Emily explains: “We’re looking at songs from around the world to connect to the theme of the tunes we’ve been doing. We’re currently looking at a Serbian song that Adrian sang at his wedding – me and John said ‘we have to try that together!’”

Tunes or songs, it is obvious that Alma will continue the musical globetrotting and passionate arrangements that make their music so special.

Whoever said that nothing good can come from a trip to the pub?
Posted by JimHxn
Email ThisBlogThis!Share to TwitterShare to FacebookShare to Pinterest
Labels: Article, Artist Profile, fRoots, UK
Newer Posts Older Posts Home
Subscribe to: Posts (Atom)