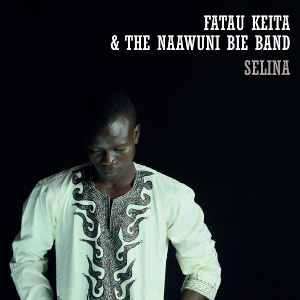 Dagbamba singer Fatau Keita hails from the northern region of Ghana, and together with his eight-strong band Naawuni Bie (meaning ‘God’s Children’ in Dagbani), he creates a music that could best be described as updated highlife with a palmwine edge.

Although the musical basis of this album lies firmly within Ghana, Keita’s Dagbamba culture means his vocal style leans more to the Islamic West – it’s often reminiscent of Baaba Maal and he places highly within his influences singers such as Youssou N’dour, Kante Manfila and Salif Keita.

The best pieces here come about when these two spheres of influence blend most seamlessly. 'Tie Kumm' is your track for this – it’s a stripped-back, dark and hypnotic groove that could probably carry on all day if it weren’t for the fade-out. The last piece, 'Won Boraa' (labelled on the album as a bonus track), is another highlight and a bit of a contrast from the rest of the album: a lovely acoustic palmwine with just guitar, shaker and vocals.

It’s not a perfect album by any means. Most of the tracks are of a rather average quality, and in a few places it sounds as if rather heavy autotuning is used on Keita’s vocals: it’s strange, as his qualities as a singer are obvious, and the use of the autotuner serves no musical purpose.

However, for this reviewer, the album as a whole is ruined by its third track, 'Act as a Woman', which is (as its title would suggest) a rather misogynistic song imploring a woman to know her place. It’s unsavoury and, while it may be more acceptable for the local market, is rather misjudged for an international release. That’s a shame, as it puts a dampener on a mostly enjoyable album which contains a couple of stand-out tracks.
Posted by JimHxn
Email ThisBlogThis!Share to TwitterShare to FacebookShare to Pinterest
Labels: Album Review, fRoots, Ghana
Newer Posts Older Posts Home
Subscribe to: Posts (Atom)