First published on Musika.uk.com in April 2013. 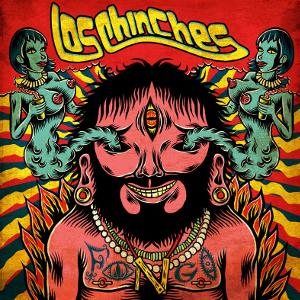 Where San Francisco-style psychedelic rock, funk and cumbia meet, that’s where Los Chinches reside. It’s not your typical cumbia though, this is chicha – a style that evolved in 1960s Lima, Peru. It combines the Latin rhythms and brass of the Colombian genre with melodies inspired by Andean music and instrumentation taken from surf rock (it was the 60s, after all).

Los Chinches are based in London, and their members hail from England, Peru, Columbia and France. This album, Fongo, is their debut, but they’ve already been around quite a bit, playing all the big festivals such as Glastonbury, WOMAD and the Big Chill.

So what’s it like then? Well, oddly, the sound is at its most attractive the more they bring in the American influences – the Farafisa-sounding organ and surf guitars really complement the Latin percussion. The album’s instrumental tracks, such as ‘Chicha Love’ and the title track ‘Fongo’, are its highlights, encapsulating the band’s own description of themselves: ‘tropical, Peruvian, cumbia, psychedelic, ska and most definitely London!’

The album can feel a bit let down by the vocals, though, which don’t feel very ‘authentic’ to this listener’s ears, although it can be seen as fulfilling Los Chinches’ ethos of bringing the chicha sound into the London soundscape. The same can be said for some of the lyrics – they’re mostly in Spanish, but when they do sing in English, it jars somewhat. Like watching the Simpsons in German.

The album as a whole sounds promising, but maybe a bit less electrifying than the recordings of occasional cohorts Ska Cubano, for example. Their sounds feel as if they would translate much better into a stonking live show, and thus these recordings, while enjoyable, may not do them the credit they deserve. One to catch live, then.
Posted by JimHxn
Email ThisBlogThis!Share to TwitterShare to FacebookShare to Pinterest
Labels: Album Review, Musika.uk.com, Peru, UK
Newer Posts Older Posts Home
Subscribe to: Posts (Atom)