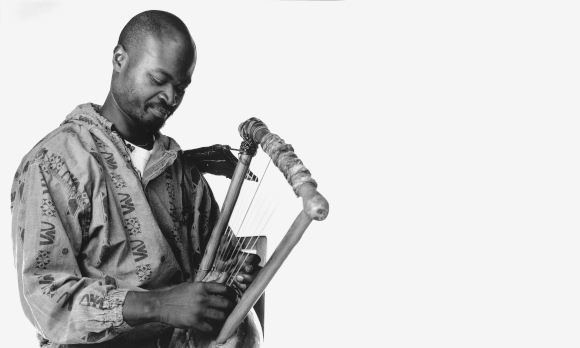 A giant of Kenyan music has passed away. Ayub Ogada died on February 1 at his home in Kisumu, after an illness. He was a master of the nyatiti, an eight-stringed lyre of the Luo people, on which he accompanied his beautiful voice. Ogada, under his birth name Job Seda, had a massive impact on the Kenyan music scene through the bands he founded, Black Savage and the African Heritage Band, whose influences are still felt in the country today. International audiences will probably be most familiar with his 1993 album En Mana Kuoyo, released on Real World Records, containing a quiet, intimate version of his most well-known song, the haunting lullaby ‘Kothbiro’. He was first noticed by Real World busking on the London Underground, but went on to perform around the world and collaborate with artists such as Peter Gabriel, Geoffrey Oryema, Afro Celt Sound System, Susheela Raman and even Gary Barlow; most recently, his work was sampled by Kanye West. In his tribute to Ogada, Gabriel said: “In the early days of WOMAD and Real World Records, many people weren’t interested to listen to music from other cultures and whenever I was trying to convince them, I would play Ayub singing ‘Kothbiro’ and invariably win them round.”