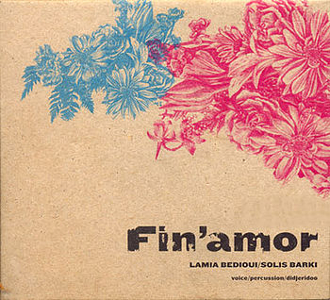 Okay, I’ll admit it: when I first received this record I was sceptical. The surrounding publicity explains how the artists explore the ‘primal’ connection between the human voice, percussion and didgeridoo through a repertoire including traditional North African, French and Eskimo songs. I hope I’ll be forgiven for imagining a collection of new-age soundscapes with shades of cultural insensitivity and very little substance.

But I ask you, dear reader, to avoid my mistake. Greek-based Tunisian singer Lamia Bèdioui treats the traditions she draws from with the musical respect they deserve while still maintaining her own sound throughout. Although the album contains pieces from, or influenced by, a wide range of cultures, none of the tracks seem to jar with each other; instead, they work together in a style that smoothly changes and transitions throughout the duration of the album.

Greek multi-instrumentalist Solis Barki provides almost all of the instrumental backing here, including 26 types of percussion as well as didgeridoo and a few pitched instruments. With such focus on the use of percussion, it would be easy to drown vocals and otherwise delicate musical statements with a wall of power, but Barki does a good job of keeping the instrumental arrangements impressively subtle (and without resorting to the new-age soundscape), allowing Bèdioui’s vocals room to soar unrestricted. The only other musician featured is Dimitris Chiotis, who plays a modified Cretian lyra (fiddle) on one of the album’s highlights, 'Ellil Yitaouel', written by the legendary Egyptian composer Mohammed Abdel Wahab.

Fin’amor really is a well-made and well-thought-out record. Give it a chance and don’t be put off by the blurb – it delivers far more than it promises.
Posted by JimHxn
Email ThisBlogThis!Share to TwitterShare to FacebookShare to Pinterest
Labels: Album Review, fRoots, Greece, Tunisia
Newer Post Older Post Home