First published on Musika.uk.com in September 2012. 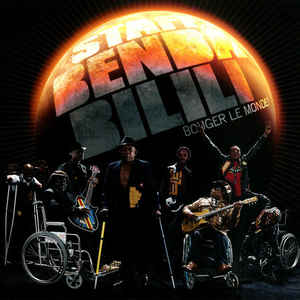 Three years after their widely-acclaimed debut album, Staff Benda Bilili are one of the most recognisable African acts in the world at the moment, for both their music and their striking image. Having toured Europe and North America several times since the release of Très Très Fort, their new album has been almost as awaited as their first. So does it live up to such hype?

The sound of the satongé, the electric one-stringed musical bow invented and played by Roger Landu, is probably the band’s most distinctive musical element, and it’s emphasised further in this album. Roger, now 21 years old, has both refined and matured his technique and sound – his solo on the track ‘Kuluna’ is simply masterful, utilising subtle wah-wah and echo as well as the usual distortion to create a sound somewhere between a Jimi Hendrix solo and a theremin. His singing, heard in live shows but not featured in Très Très Fort, makes an appearance this time around and to brilliant effect. His voice probably the smoothest out of the seven singers featured on the album, proving that this prodigy always has more to offer.

One of the most obvious changes on this album is the large influence of Latin music, most particularly the rumba Lingala that was for so long the DRC’s signature music before the ‘Congotronics’ sound came to the fore. The Latin element is probably used to best effect, and at its most noticeable, in the track ‘Ne Me Quitte Pas’, a highlight of the album and a much darker sounding piece than some of the more traditionally soukous-like tracks such as ‘Libala Ya Mungwa’ and ‘Mutu Esalaka’. Another addition is the electric guitar of Amalphi Masamba, most effective during its roaring solos, providing a delicious contrast to the lo-fi electro-acoustic sounds of the famous Socklo guitars of the rest of the band.

One element lacking from Bouger le Monde!, however, is the feeling of wide originality. Staff Benda Bilili’s first album was a great listen primarily because of its exciting freshness of sound – each track had its own personality that set it apart from the rest, a feeling that stretched to the album itself. Their follow-up, however, seems rather samey in comparison; most tracks feel as if they would either belong on Très Très Fort stylistically, or that they could have been played by a typical rumba band (albeit an incredibly talented one).

Taken on its own, this is a great album – in fact, of Congolese rumba, one of the best. Yet as a second album to a debut which quickly attained classic status, it falls slightly short of that very high bar. But not by much.
Posted by JimHxn
Email ThisBlogThis!Share to TwitterShare to FacebookShare to Pinterest
Labels: Album Review, DR Congo, Musika.uk.com
Newer Post Older Post Home