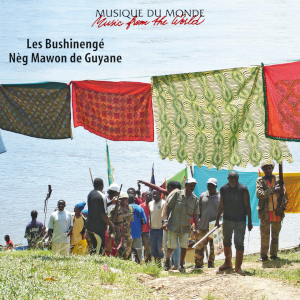 The Bushinengé people from French Guiana and Suriname are descended from escaped slaves who fled to the Amazon and intermarried with the local Amerindian population. As a result, their culture mixes influences from all over Africa and the Amazon basin.

For the Bushinengé, music and dance are two halves of the same thing, and you’ll never find one without the other. It’s all meant to bring people closer together and as a result, it has a real community feel. It also means that every element of the music is geared towards getting you off your bum. It’s almost exclusively based around percussion and song, which is sung with a really distinctive vocal style that uses wide, heavy vibrato. A West African influence is particularly noticeable, especially with patterns played on beer bottles that sound so reminiscent of those in Ghanaian music.

This album is the latest addition to the wonderful Musique du Monde album series. It was recorded across French Guiana, capturing all sorts of performance styles and contexts, from live shows to living rooms and everything in between. It’s a great musical overview from a region we rarely hear, and from a people we hear even less.
Posted by JimHxn
Email ThisBlogThis!Share to TwitterShare to FacebookShare to Pinterest
Labels: Album Review, French Guiana, Songlines Magazine, Suriname
Newer Post Older Post Home