First published on Musika.uk.com in June 2013. 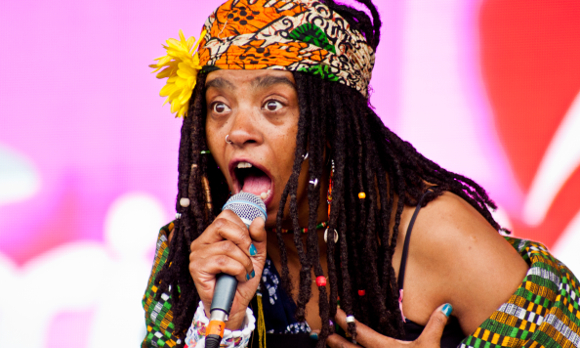 Africa Oyé is the UK’s largest free African music festival. Having previously featured world-famous African musicians such as Baaba Maal, Remmy Ongala and Bassekou Kouyaté, Oyé have also presented artists from the African diaspora in the Caribbean such as Culture and Luciano, and been the stage for the UK debuts of Tinariwen, Ba Cissoko and more.

This year, the organisers had all the incentives they needed to stage a bumper edition of the festival – not only was 2013 Oyé’s 21st birthday, last year’s event got rained off and had to be hastily rescheduled and moved (in a much-reduced format) to an indoor venue. The weather was kind to the festival this year, and, while it was showery and blustery enough to make the audience a bit uncomfortable, the party went ahead as planned, in Liverpool’s Sefton Park.

Unfortunately, the first of the two days got off to a disappointing start. Marred by overly-bassy sound, the first three sets became somewhat of a chore to listen to. It was the penultimate band of the Saturday, Son Yambu, who finally managed to get the festival flowing, their old-style, trés-led Cuban son warming up the soggy crowd in time for that day’s headliner, Osibisa. The Ghanaian veterans brought their trademark mix of disco, rock and West African and Caribbean sounds, including their hit ‘Sunshine Day’ and a cover of Miriam Makeba’s ‘Pata Pata’, to finish the day on a high note.

Cape Verdean hip-hop and reggae outfit Jay opened the Sunday (without the sound problems that plagued their set the day before) to a smaller, but no less appreciative crowd. Two funky Ghanaian acts followed, Yaaba Funk and Atongo Zimba, the former presenting hip-shaking highlife, and the latter giving the crowd an updated version of North Ghanaian traditional music, with the help of former Stone Roses guitarist Aziz Ibrahim and blues collaborator Ramon Goose. Typically groovy Afrobeat from Dele Sosimi set the stage perfectly for the highlight of the festival, Mokoomba. As opposed to the Shona bands that dominate Zimbabwean music, Mokoomba sing in the Tonga language, and seem to be capable of playing any style of music, from jit, jive, isicathamiya and soukous, to reggae, blues, and even hints of heavy metal. They’ve been hailed as the ‘next big thing in world music’ and that’s hard to argue with after the show they put on, rounding off a much more enjoyable second day to the festival.

A successful weekend of great music then, somewhat marred by technical difficulties early on, but with a line-up to keep you dancing all day long - and there’s certainly something to be said for only having one stage so you don’t miss anything, too. Perhaps the festival didn’t present the stellar line-up that may have been expected, but as a charity mostly reliant on government and council funding, Africa Oyé certainly showed that they can continue to put on a great party despite low funding – a feat they will doubtless continue to recreate for another 21 years or more to come. 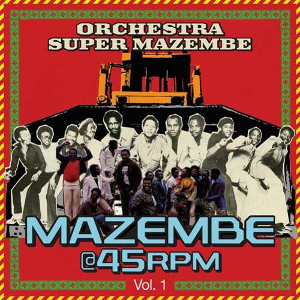 Orchestra Super Mazembe may be one of the most influential bands in African music. They were one of the first exponents of the Latin-influenced Congolese rumba lingala (or soukous) to up sticks and move to Kenya, where their music evolved into what is now known as benga. This in turn crossed over to Zimbabwe, transforming into sungura and jit jive. You’d be hard pressed to find them in a record shop outside of the African continent, though.

Mazembe @ 45rpm, Vol. 1 remedies this by presenting pieces taken from 45rpm releases from the late ’70s – the most common way of disseminating music at the time. None of the tracks are shorter than six minutes long, each containing both A and B sides of the single, the two parts of the same song blended seamlessly.

The pieces reveal a wide range of moods, from the danciest grooves of ‘Okova’ to the more relaxing ‘Izabela’, but they all have the common soukous spices – interweaving high-pitched guitar melodies, effortlessly tight harmonies and an overall aural sunniness. Oddly enough, the compilation neglects what was perhaps the band’s biggest hit in Kenya, 1977’s ‘Kasongo’, but the tracks that are included are solid gold.

Another inclusion is a detailed 15-page booklet, with band biography and song explanations created with help from another soukous legend Samba Mapangala, who features on the album himself, taking vocal duties on the track ‘Mwana Mazembe’.

Although the sound reproduction can be a bit scratchy at times, this can be forgiven in lieu of the great music contained within. Bring on Volume 2!
Posted by JimHxn
Email ThisBlogThis!Share to TwitterShare to FacebookShare to Pinterest
Labels: Album Review, DR Congo, Kenya, Songlines Magazine
Newer Posts Older Posts Home
Subscribe to: Posts (Atom)