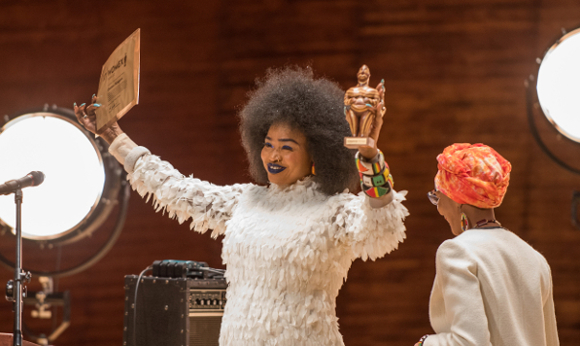 It’s a special artist that can stand out from the crowd in a country with as many musical heroes as Mali. It’s an extra special artist that can be a superstar in both their own culture and around the world. That’s exactly what Oumou Sangaré does. When she performed at WOMEX 1995, we called her ‘one of the few true stars to come out of the world music movement’. More than 20 years later, our movement has had more global stars but Oumou has remained bright among them.

Oumou Sangaré takes a special aura wherever she goes. Even if she’s working silently in a corner, her presence fills the room and everyone seems to orbit around her. She is regal, and when she opens her mouth to sing, everything makes sense. Her voice shimmers and soars above the audience, showering them with emotions and taking on many shapes and colours. One moment delicate and gentle, the next roaring and fizzing with electricity.

Oumou’s grandmother was a famous singer in the Wassoulou region of southern Mali, and that baton passed to Oumou’s mother when she moved to the capital city Bamako. Of course, Oumou was never far behind, kindling her interest: “I was always there with my mother when I was little. I sang at weddings, baptisms, I was learning all the time. That’s when I fell in love with music.” Even though she was small, her voice was big. When she was only six years old, she won a country-wide singing competition in front of 3,000 people in Bamako Stadium, dressing up and performing as her hero Coumba Sidibe.

Her transformation from child singer to next-big-thing did not take long. Her voice made her the main breadwinner of the family by the time she was twelve. After being persuaded to record a tape, it sold more than 250,000 copies, was picked up by World Circuit Records and released worldwide in 1991, catapulting her into international fame – all by the time Oumou was just 22. She has since released four more albums and a critically-acclaimed retrospective. The rest of her time is spent touring the globe, tending to business concerns, organising festivals and undertaking community projects.

Oumou’s music itself is very special. Throughout the years, her sound has encompassed every form of Wassoulou pop, and pushed boundaries too. Her range stretches from down-to-earth styles using only traditional instruments, to fully funked-up renditions with synthesisers, drum kits and full horn and string sections. It’s part of how she has been able to command such huge and diverse fanbases. “We’ve got a culture that is very rich and can adapt to all cultures of the world,” she says, “Mali has a super rhythm, and I have always kept the origins of that rhythm, I always keep the traditional instruments. When I collaborate with people, they will bring their own music. But I never take anything away from my music. Always the kamalengoni (harp), always the karignan (scraper), always the djabara (shaker).”

Oumou’s power comes not just from her amazing music, but the messages she uses it to convey. As a child, watching her mother suffer in a polygamous marriage, surrounded by jealousy and distrust, Oumou vowed to make a change in any way she could. That way was through song: her lyrics are unceasing with their support for women’s rights and fierce criticism of abuses wherever she sees them. Topics she explores include polygamous and forced marriage, the place of women within the home and family, and female sexuality and sensuality. Scandalous stuff in a conservative society, but these points are the core of her work. “I am the most proud that I have been able to denounce injustice, that I have got strong values. I have been able to stand up for Malian women and street children. I am proud to speak on behalf of African women. I take my energy from that.”

At the beginning, she was not universally loved. Older men in particular were annoyed by her; she was upsetting societal rules that had stood for hundreds of years. But the women got it, and agreed, and the young men soon came around too. Now Oumou’s concerts are full of both women and men who love her music and support her message. Although she sings primarily in Bamana, her words reach far beyond Mali. They are heard throughout Africa and the world. Attached to her irresistible voice and supreme musicality, her messages and lyrics have been translated widely. “When I release an album, it is a big occasion for women in Africa. Not just in Mali – the whole of Africa! Of course not just the women are happy, but the men too.” Her ability to touch hearts and minds even surprises herself sometimes: once, arriving at a Mexican airport, she was greeted by a delegation of 400 women. “I said, ‘Why are you here? You don’t know who I am!’, but they all knew my songs and the meanings of my lyrics, and they were very important to them.”

Oumou is tireless in her actions to improve society: she owns the first hotel in Bamako to cater specifically to people from Wassoulou; she runs a farm where she grows her own-brand ‘Oumou Sangaré Rice’; she was even the first to import decent, affordable cars into the country, known as ‘Oum Sang’ cars. All of these have the aim to make life better for Malian people. In 2016, she founded the first international festival in Wassoulou, to promote the region’s music within Mali and abroad.

It is the theme throughout her life: she uses any tools she can – extraordinary music, international connections, business acumen – to improve lives both short- and long-term. To honour her dedication to activism and advocacy for the underprivileged in Mali and beyond, her exciting and innovative developments in Wassoulou music and her longevity as an internationally-beloved star, we present the WOMEX 17 Artist Award to Oumou Sangaré.

Special thanks to Jenny Adlington for translating the interview. 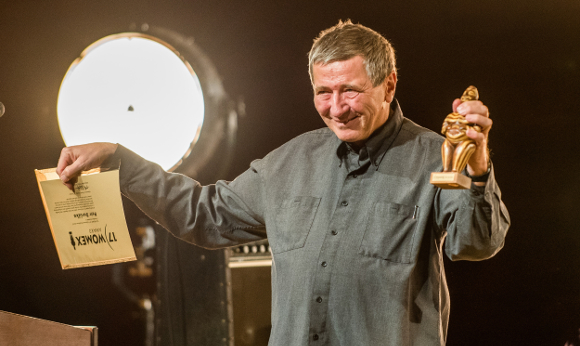 It is common that some of the best journalists escape notice. Their writing works to channel their subjects in such a captivating way that it makes a direct contact with the audience. It’s an important skill, but it often renders the work of the journalist as part of the background. But arts journalism, in particular, is not just an invisible, honed skill for the entertainment of its audience; it is also one of the integral gears in our machine, opening our eyes and ears to music and culture that would otherwise have never reached us. For this reason, it is important that we honour journalists for their crucial work. Petr Dorůžka is a shining example of the role that great journalists play.

When Petr was growing up, his father was already celebrated in the Czech music scene as the country’s premier jazz expert. Lubomír Dorůžka’s career in journalism started clandestinely during the Nazi occupation, publishing illicit magazines with the latest news from the jazz world. Being brought up in that environment, it is little surprise that the young Petr gained the same enthusiasm for music. His father was that early influence, “especially in realising the importance of music,” Petr says. “When I was a teenager, I remember he had to leave our skiing vacation and return to Prague to stage a concert with Ella Fitzgerald.”

Such influence notwithstanding, Petr’s tastes were different. His personal musical journey started with Frank Zappa, Bob Dylan, the Beatles, the Rolling Stones, Velvet Underground. The sort of bands you would imagine for someone coming of age in the 1960s. The difference was that most of these artists, world-famous as they were, had not yet managed to reach many ears in what was then communist Czechoslovakia. That urge to tell people and talk about exciting bands eventually led to the start of his journalism. His first experiences of writing were about off-kilter, less well-known rock artists. Like many of his generation, Petr came to ‘world music’ (before such an idea existed) through the Beatles, or, more specifically, George Harrison, through the film of his 1971 Concert for Bangladesh, which featured North Indian classical music: “I remember watching [Indian sarod player] Ali Akbar Khan. To play classical music and smile on stage – that was such a sweet shock 50 years ago.”

From that spark a passion ignited and the direction of his work reflected it. Now he is well-known for his world music programmes on Czech national radio, as well as writing for many publications and maintaining his own website full of material. His work is always meticulously researched – no fake news here! – and with clear passion and knowledge. It is obvious why he is regarded as the leading expert in world music within the Czech Republic. His expertise and reputation have led to him becoming a member of many important panels in world music – he has been a part of the World Music Charts Europe almost since its inception (he came on board in 1992), has served in fRoots Magazine’s critics’ poll since 2001, and several times on the jury of the Sayan Ring festival in Siberia…as well as serving as one of WOMEX’s 7 Samurai in 2007.

Petr doesn’t see the journalists’ place in the musical party as in their own bubble, observing the various happenings but never deigning to interfere. Instead he sees them as part of a wider group, bound by a common cause. Into this group he puts eclectic radio DJs such as John Peel and Charlie Gillett, as well as researchers/producers such as Francis Falceto and David Lewiston: “In general, [journalists are] people who build bridges between as yet unknown music and the adventurous audience. We should also include artists like Sam Lee. When he sings old travellers' songs, in between the lines we read: here are the values that should be respected!”

At the core of journalism is a delight in giving people new information – whether to excite and tantalise or to expand world-views and pose interesting questions. With this outlook, it is natural that Petr is also an educator. He approaches this role with that same delight as his journalism, bringing new aural and cerebral experiences to his students. He developed the course entitled ‘World Music for Non-Musicians’ at Univerzita Karlova in Prague. “I wanted to offer a kind of ‘cultural vocabulary’, explain how specific genres function in the original context, and offer a key how to understand them. David Lewiston once said: "I think of an ethnomusicologist as someone who takes wonderful music and analyses it until all the joy has been lost." In my lectures I wanted to issue a warning against this method, and present the music in a more friendly way.” And the passing on of musical knowledge is not just Petr’s job, it is his life. He is now the middle rung of a celebrated musical family. While he and his father found their acclaim in the journalistic spheres, Petr’s son David Dorůžka is considered one of the Czech Republic’s foremost jazz guitarists – in fact he will be performing at WOMEX 17 with Marta Topferova & Milokraj.

Petr is a well-known and well-loved face in the world music community. In honouring the journalists in our own branch of the music world, his name can never be far from the lips. The high esteem in which he is held across the scene is both hard-earned and much deserved, yet he retains a profound and genuine modesty. In that way, he represents those deeply committed but often little-noticed communicators that open ears around the world. It is for all these reasons that Petr Dorůžka is an ideal recipient of the WOMEX 17 Professional Excellence Award.