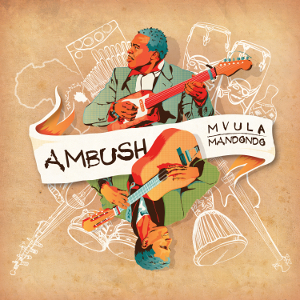 Having first cut his teeth as percussionist in Remmy Ongala’s legendary Orchestre Super Matimila, Ambush represents Saidi Kanda’s first release as a bandleader. He doesn’t limit himself to percussion either, adding thumb pianos, hedungu (harp-lute) and homemade guitar into the mix, as well as vocals.

Mvula Mandondo are the fruit of a collaboration between Kanda and British multi-instrumentalist Edward Shearer, and this album presents a mix of soukous, Caribbean, Latin and even West African music, all interwoven with styles from Kanda’s native Tanzania.

Indeed, the band are at their best when the Tanzanian roots shine through most clearly. This is illustrated in probably the most effective track on the album, ‘Hinongo’. The piece is based around Kanda’s ilimba (thumb piano) and features traditional-style vocals in the ancient language of kiZalam, both of which work perfectly alongside a fast and funky reggae backing, realised through Shearer’s bass and drums.

While some of the more soukous-laden tracks end up feeling somewhat unoriginal, the salsa-inspired pieces are amongst the album’s best listening. The track ‘Tsunami’ (based on Kanda’s musings on the Bosnian civil war) starts with a groove that brings to mind Senegal’s Orchestra Baobab before picking up the pace and introducing Spanish guest singer Rafael Berrio.

At times it can seem as if the duo has tried to include too many different styles on one album, which can feel slightly lacking in cohesion. Ambush isn’t perfect, but it includes some gems and does work as a promising debut.
Posted by JimHxn
Email ThisBlogThis!Share to TwitterShare to FacebookShare to Pinterest
Labels: Album Review, Songlines Magazine, Tanzania, UK
Newer Posts Older Posts Home
Subscribe to: Posts (Atom)