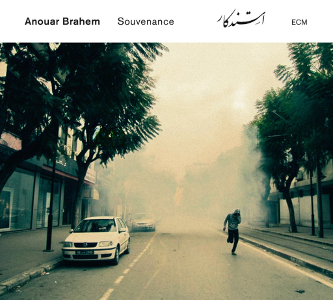 Look here for a lesson in subtlety and restraint. Souvenance is one of those now-rare specimens: a double album of original material; over the two CDs, the album clocks in at about an hour and a half.

Although the Tunisian Anouar Brahem is classically-trained in the oud, this album doesn’t immediately stand out as Arabic; instead, it feels like Western contemporary classical music, written and performed by jazz musicians. Or perhaps vice versa – or more accurately, both at the same time. It seems to owe some influence to Glass, and Miles Davis during his smooth period, but Brahem’s compositions are all his own. The Tunisian core of his writing becomes apparent slowly, but is indeed all-encompassing, heard in an unexpected semitone, an unfamiliar glissando or the unmistakable swoop of an Arabic melody.

Although the Souvenance is made up of eleven tracks, each piece seems to be part of one whole, both CDs of the album halves of a single work. Musical themes recur throughout – if not directly, they are hinted, similar patterns of rhythm or melody stirring some uncanny recognition. It all works together. Each composed note feels to have been meditated over, and whether the texture is focussing on sparse, singular notes or massed, arpeggiated runs, there never seems to be more or less than is needed, musically or instrumentally.

The arrangements here are for quartet (Brahem’s oud, plus piano, bass clarinet and bass) and string orchestra (the Orchestra della Svizzera Italiana, conducted by Pietro Mianiti). With the string orchestra at hand, it would have been all too easy for Brahem to overuse their voices and the power they can bring. Subtlety comes through yet again, however. Sound comes in well-weighted bursts and swelling waves, the orchestra often providing the soundscape for the quartet to explore and make its own, with the strings offering breezes of their own sympathetic story.

Souvenance is an impressive and intelligent work, a credit to Anouar Brahem as a composer and both the quartet and orchestra as musicians. A perfect combination of the classical styles of North Africa, Europe and African-America.
Posted by JimHxn
Email ThisBlogThis!Share to TwitterShare to FacebookShare to Pinterest
Labels: Album Review, fRoots, Tunisia
Newer Posts Older Posts Home
Subscribe to: Posts (Atom)