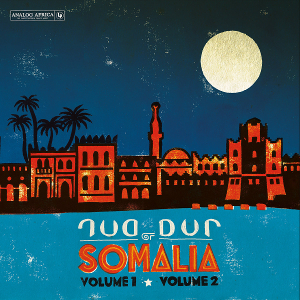 They were the biggest band in 1980s Somalia, huge across the whole Horn of Africa, and they’re not completely unknown outside the continent, either. Dur-Dur Band’s album Volume 5 was reissued by Awesome Tapes From Africa in 2013 to much acclaim, and now Analog Africa have taken the reins to release their remaining albums. This collection includes the band’s first two albums from 1986 and 1987, as well as a couple of previously unreleased tracks.

And wow. It’s a hot one, alright. As expected from Analog Africa’s output, this album is filled with funk, and Dur-Dur go hard: the track ‘Doon Baa Maraysoo’ is an intense seven-and-a-half minutes of driving groove, and it’s not alone in that. It all has its deepest roots in Somali traditional music, particularly the powerful sounds of the saar possession rituals. There’s also a surprisingly heavy dose of roots reggae in there too, complete with amazing bass guitar by Abdulahi Ujeeri Ajami. Add saxophones, synthesisers, electric guitars and the legendary voice of Sahra Dawo into the mix, and you won’t wonder why this band was so big.

Somali music is shaping up to be a world music phenomenon; Dur-Dur Band is a great place to start.
Posted by JimHxn
Email ThisBlogThis!Share to TwitterShare to FacebookShare to Pinterest
Labels: Album Review, Somalia, Songlines Magazine 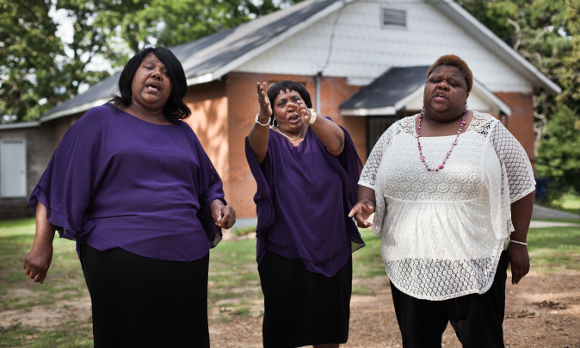 Como, Mississippi is a small place. It’s a rural town that sits on the edge of the Mississippi Delta, home to just over 1,000 people. Its size may be diminutive, but Como is world-renowned for its history of blues; it’s the hometown of Mississippi Fred McDowell and Otha Turner, among others. In today’s Mississippi, though, the town is known for one thing: gospel. The Como Mamas are telling the world all about it.

The Como Mamas are three wonderful gospel singers: Ester Mae Wilbourn, Della Daniels and Angelia Taylor. They’re a family group – Della and Angelia are sisters, Ester Mae is a cousin – and they’ve been singing together for fun and faith since childhood. Their start as a performing group, however, came rather by chance about ten years ago, when Della was looking for a record label to listen to her nephew’s hip-hop group. There was no interest in the hip-hop, but when Daptone Records learnt of Como’s gospel tradition, they headed down from New York and were blown away at what they heard – especially that trio from the Mount Moriah Church.

Those voices! They each have their own special sound. Della’s voice is sweet and girlish; Angelia’s is low, rich and occasionally roaring; Ester’s is somewhere in the middle. Each voice complements the others perfectly, and as they all weave together – sometimes melody, sometimes harmony, sometimes dancing over and between the two – they create something that is truly soul-nourishing.

As well as releasing two records – 2013’s Get An Understanding and 2017’s Move Upstairs – Daptone also gave the Como Mamas their name. Della says it took a while to adjust to: “At first we didn’t like it, we was like ‘that sound like they kinda making fun of us.’ But when the people of Como heard that our group was named after their town – and it’s such a small town – they started getting so excited, they kept asking us will we go here, will we go there, and it seemed like the more they was able to get us to participate, the more they became interested in us, you know?” Music is in the Mamas’ blood as much as it is in the blood of Como. Angelia recalls tales of her elders, “I listened to them tell the stories of when they were younger, they went to town and they went to church all the time and sang gospel, and that was just the big highlight of their week. That’s all what Como was big on back in the day, because they had nothing else to do! No other recreation but gospel or blues, that’s all they had for fun and enjoyment!”

While so many gospel stars make music closer to neo-soul or even pop, the Mamas stick to that older style. Theirs is the sound of old spirituals simmered in the birthplace of the blues, and there is no question that this is music of the soul. They’re the real deal. When the Mamas sing and dance and preach, they radiate power. Their sounds are hypnotic. In their live shows, their call-and-response sections can last five minutes or longer, endlessly repeating and subtly varying short phrases that swirl around the room. There are connections there with esoteric musical traditions from around the world: strangely, it doesn’t feel a million miles away from a Moroccan Gnawa ritual.

Gospel is just relentlessly joyous. It’s almost impossible to hear the Como Mamas sing without having a big stupid grin on your face by the end of the song. It’s telling that Angelia’s advice for the world is “don’t let nobody steal your joy.” She lives that message too – in May, she was shot through the chest in a drive-by shooting, but it was only two months later that her shining smile was lighting up all it touched as she shouted the good word at the group’s very first UK gig.

As their name implies, the Mamas have plenty of life experience to pour into their music. They picked cotton in the fields together as children, when Mississippi was still full of ‘whites only’ signs; now they’re matriarchs, with their own broods expanding to include great-grandchildren. They’ve seen it all. But for them, they couldn’t have chosen a better time to gain international recognition. “Because I am a Christian and because my life is in the Lord’s hands, I know that he knows when the best time was for me to do what we do,” says Della, “Because if I was younger, I would have a job and I wouldn’t be able to travel, there probably wouldn’t be no Como Mamas. The time is better for me now, because if I don’t want to do something, I don’t have to do that, I can just go on tour!”

It would be doing them a disservice not to mention the Mamas’ deepest passion – God’s word. They’re gospel singers after all. It’s the subject of every song, and every conversation with them is liberally sprinkled with Bible quotes and teachings. Spreading the word is their life’s work and deepest pleasure, and when they’re on stage, that energy is so palpable, whatever your faith. The Como Mamas may not make music at the cutting edge, but they uphold a real roots tradition that survives and thrives in the churches of Como, Mississippi. And they do it gloriously.