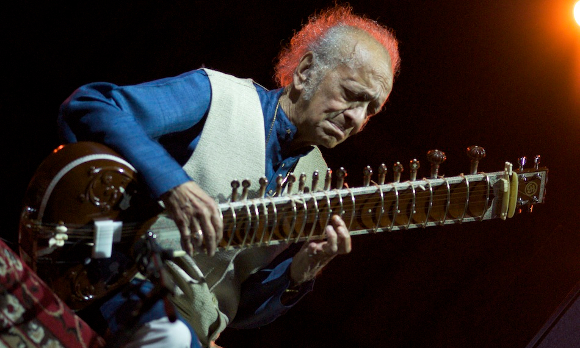 A true innovator of Hindustani classical music, Shankar learnt to play in the Maihar gharana of his guru Ustad Allaudin Khan, which he used to adapt his own style, fusing dhrupad, khyal and thumri genres as well as incorporating elements from the Carnatic (South Indian) style of classical music, one of the first Hindustani musicians to do so.

But Shankar also expanded his repertoire far and beyond the classical music of his training. Being influenced by European classical styles, to which he was exposed during a period in France as a child, he composed ballets, concertos, a symphony and several original soundtracks for film. He also collaborated with Western art musicians and composers such as Yehudi Menuhin, André Previn and Philip Glass.

He was most well-known throughout the world, however, for his introduction of Indian music into the Western popular mind-set through collaborations with rock musicians, most famously George Harrison, to whom he taught the sitar, as well as recording several albums together. His association with Harrison lead to his appearances at festivals such as the Monterey Pop Festival and Woodstock and, famously, on the American TV show the Dick Cavett Show. He also opened the Concert for Bangladesh, organised by Harrison, in jugalbandi (duet) with Ustad Ali Akbar Khan.

Shankar had continued to tour until 2011, and was still performing concerts as recently as last month, his final performance coming on 4th November, near his home in California.

He is survived by his wife, Sukanya and his two daughters, both famous musicians in their own rights, pop-jazz singer Norah Jones and sitarist Anoushka Shankar. His son, Shubhendra ‘Shubho’ Shankar died in 1992. 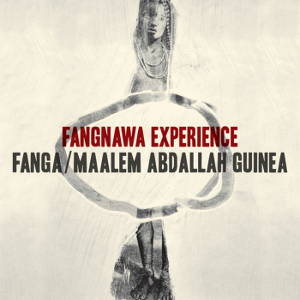 In an era where collaboration is the key to some of the most exciting musical styles around, some fusions remain surprisingly under-represented. Such a fusion is explored in this album, in which Afrobeat collective Fanga (led by Burkinabé singer Korbo), and Mâalem (Gnawa master) Abdallah Guinéa and his band Nasse Ejadba from Morocco perform a selection from the former’s 15-year back-catalogue.

Although some similarities can be drawn between Moroccan Sufi Gnawa music and funk-laden Afrobeat such as their repetitive and insistent backing rhythms, it would seem that the two styles are too different to easily mould into one, and indeed this album seems to prove as much.

At its high points, the ensembles gel in a very pleasing manner: in ‘Kononi’, by far the most effective track on the album, qaraqab (metal castanets), drum kit and congas create a strong percussion section while Hammond organ, guitar and guimbri (bass lute) provide a hypnotic backing for melodies from Guinéa and the Fanga horns. Such highs are, however, somewhat hard to come by. Tracks such as the 14-minute opener ‘Noble Tree’ suffer from sounding more akin to medleys of Afrobeat and Gnawa songs rather than a melding of the two; the Afrobeat not getting a chance get one dancing, nor the Gnawa room to hypnotise with its loping rhythms.

The overriding feeling given is of a fusion that could yield magical fruit if treated carefully, but this album misses that mark somewhat; a sequel may well prove a more intriguing affair. 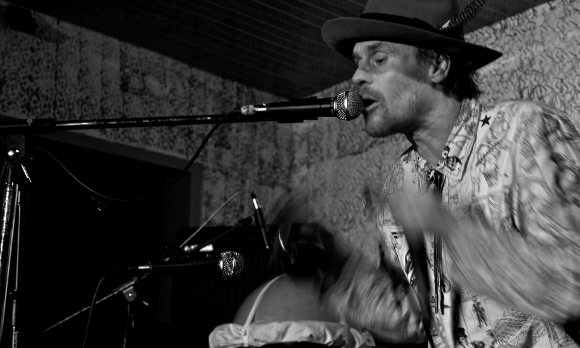 In the cosy, low-ceilinged Bedroom Bar in Shoreditch, the crowd slowly fills up during the evening’s opening act, Into the Moon. This Parisian ensemble, led by American singer Leander Lyons, take music from the place where rockabilly, hot jazz and gypsy music from throughout Europe meet. Having studied with gypsy musicians in France and Turkey, the violin of Mirabelle Gilis swings in and out between the vocals and guitar-work creating an attractive melding of styles that works equally well being played fast and furiously or in a more relaxed and contemplative manner.

After receiving much appreciation from the at that point packed venue, Into the Moon made way for the event’s main act. Originally from Winnipeg, Canada, Son of Dave (stage name of one Benjamin Darvill) graced the stage in a white suit patterned with old-style newspaper lingerie adverts, bolo tie and silk dressing gown, together with his usual shades and wide-brimmed fedora. The rest of his stage-show is no less eye-catching.

Darvill has been credited with popularising the use of the loopstation to create every part of a track from scratch, live and with minimal musicians – as opposed to its previous use of layering sonic textures, usually on guitar, to create dense soundscapes – and he provided a fine demonstration of his trademark skill here. Pieces emerge from beatbox, shakers and basslines (created by pitch-shifting his vocals), giving room for the driving harmonica and a voice that can range from squeaky and playful to low and menacing.

Although he’s rightly known for his mastery of the blues harp, Son of Dave’s music seems to take more musical influence from grooved-out funk than anything else. The dry humour, stage presence, and other intricacies are taken from the blues, and the genre can be heard more obviously in some songs than others, but a blues label would probably do a disservice to a man whose repertoire far exceeds it.

Mostly playing a selection of tracks from his past three albums on the night, Darvill also previewed new material from his latest album, currently in post-production. As well as a few covers including the track ‘Black Betty’ (“written by some guys in a field, recorded by Leadbelly years later, and then ruined by Ram Jam”), he also performed new compositions such as the bluesy track ‘Shake Your Hips’.

While most of the crowd were fully immersed in the grooves emerging from the stage (even being able to be led on a sing-along on the second song of the set), Son of Dave seemed irate at several points in his set due to the amount of chatter coming from the back of the venue. Ever the comedian, however, Darvill used his sharp wit to make light of the situation and channel the energy even more so into his music. By the end of the gig, the supercharged wave of music and madness had raised the temperature by what felt like 10 degrees, and the crowd were cheering for long after their one-man-band had left the stage. And all that from one man in a big hat.