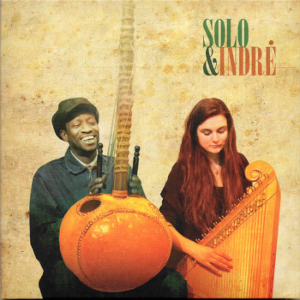 Cross-cultural kora and string collaborations have been rather in vogue for the last couple of years, and for good reason: they often yield wonderful (or at least interesting) results. The duo of Solo Cissokho and Indrė Jurgelevičiūtė is no different.

While Senegalese griot Solo brings his kora, Indrė brings the Lithuanian tradition with the kanklės, a plucked zither. The mix of Baltic and West African folk styles is an unlikely one, but the sound it creates is relaxing, thoughtful and oddly saddening, in the most beautiful way.

The two vocal traditions are very different, and so aren’t really blended here – rather, they sit beside each other, neither encroaching too far on the other. When the strings play together, however, the styles mix beautifully, with the different melodies and harmonies dancing around and between each other; it’s often hard to tell where one instrument ends and the other begins.

Maybe the album would benefit from having a few more Lithuanian-based pieces, but the tracks that are here still work together to make a great album. Hopefully this collaboration will continue to flourish into the future.
Posted by JimHxn
Email ThisBlogThis!Share to TwitterShare to FacebookShare to Pinterest
Labels: Album Review, Lithuania, Senegal, Songlines Magazine
Newer Posts Older Posts Home
Subscribe to: Posts (Atom)