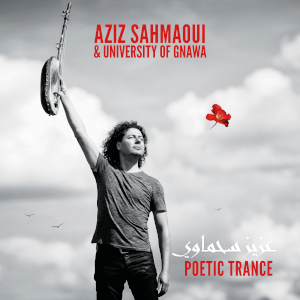 Aziz Sahmaoui, Moroccan co-founder of the legendary Orchestre National de Barbès, is back for a third album with his group University of Gnawa; together they explore the historic connections between the Gnawa of Morocco and the Mandé world to the south using music as their magnifying glass.

Aside from Sahmaoui himself providing lead vocals, ngoni and mandola, the core of the band are three Senegalese musicians, Alune Wade on bass, Hervé Samb on guitar and Cheikh Diallo on kora and keys. All three also sing, and so the Senegalese – and especially Wolof – sound is incredibly pervasive throughout. The Senegalese and North African elements are tumbled together with rock and reggae, making the end result rather poppy, actually.

Despite what the band name would suggest, though, there’s less Gnawa on the album than you’d expect. It’s a shame, because the strongest tracks on the album are the ones where it is brought to the fore, such as in ‘Soudani ya Yémma’ and ‘Sotanbi.’ It’s on these tracks that the album’s stated brief of ‘exposing universal truths’ of the connections between North and West Africa seems closest to being realised. Elsewhere, it just feels neither here nor there.
Posted by JimHxn
Email ThisBlogThis!Share to TwitterShare to FacebookShare to Pinterest
Labels: Album Review, Morocco, Senegal, Songlines Magazine
Newer Post Older Post Home