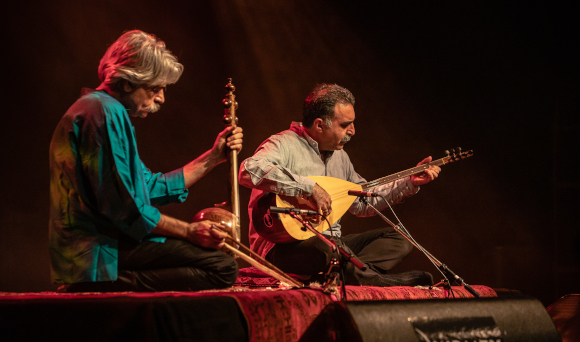 For Kayhan Kalhor, the kamancheh is his voice. When he plays, he creates whole languages in which to communicate with people from all over the world, from centuries past and far into the future.

Born in Tehran to Kurdish parents, it was quickly clear that Kalhor had a special talent for music. Although he started by playing the violin, it didn’t take long for him to become entranced by the kamancheh, switching his studies to the ancient Persian spike-fiddle by the time he was 10. Just three years later he was working with the National Orchestra of Radio and Television of Iran, and his career as a professional musician took flight.

Since his prodigious childhood, Kalhor has rightly been regarded as a true master of Persian classical music, but that mastery doesn’t come only from his immersion in the tradition. Without innovation, the tradition cannot exist, and Kalhor has been at the forefront of innovation in his field for decades. For him, there was no other option. “This happens in every generation and in my generation, I’m one of the people who tried to do that,” he says. “It comes very naturally. You don’t decide to do it, it just happens because you don’t want to sound like your teacher. At some point you have to translate your tradition to how it’s supposed to sound in your own generation’s voice.” The way he develops the tradition and makes it his own comes in part from the wide range of styles he exposes it to. Throughout his career, he has worked with the best musicians from across Iran and studied the folk musics of Kurdistan and Khorasan, allowing all of these voices to permeate his own sound; eventually, it all grew together into playing techniques and methods of improvisation that were entirely unique to himself.

This spirit of innovation extends far beyond the borders of his own culture. A globally-focussed way of working took seed when he studied Western classical music in Italy and Canada. There he gained useful knowledge of different ways of approaching music, while taking pains not to corrupt his own style. “I was so careful not to learn anything that damages the traditional way of thinking or playing. I was so conscious of that during those years, just to get good things that I need and not absorb things that might change my direction.” This way of picking only those elements that would enrich his style and identifying those that would weaken it became an important method when performing with other, distinct cultures.

On the international scene, Kalhor is most well-known for his world-spanning collaborations. From Shujaat Khan, Yo-Yo Ma, Erdal Erzincan and Toumani Diabaté to the Kronos Quartet, Brooklyn Rider and the Rembrandt Frerichs Trio, Kalhor’s musical partnerships are many and varied, and the results are invariably world-class. When he plays with these musicians, he stays true to the sanctity of his musical culture but deconstructs it in a way that creates new, entirely sympathetic fusions with those of his collaborators. Together they create an intense, improvisatory music that is not from one culture or the other – it is always both and always neither. “I can say it’s a new language, and I want to get deeper in that language, to create a vocabulary. It’s give and take…I’m after creating a language where you can know this is old music, but at the same time, there are new words that are comprehendible, not so new that they are beyond recognition. One foot in the old traditions and one foot in the future.” His collaborations are so successful because they are more than just an album or a concert, they are full, holistic relationships where music is just one part: “I stayed with these musicians for years and years. I’m living with these people. I’ve been with Shajaad Khan for 24 years, Yo-Yo Ma for 21 years, Erdal Erzancan for 13 years. I look at these collaborations as a process, something that breathes and lives. That is why I was so meticulous in choosing musicians, someone I could live with, someone I could understand, be a friend of their family, have a non-musical trip with. These were all factors, and that’s why I had to choose someone who was exactly like me, in their own country, musically and non-musically.”

With so much thought, philosophy and concentrated effort that goes into preparing his work – whether solo or in collaboration – when Kalhor plays, the music flows as easily and gracefully as a swooping bird, a completely natural phenomenon. For him, all the work simply allows the music to manifest itself. “It’s difficult to explain it,” he ponders. “I think we’re all devices of goodness and beauty in this world. The beauty comes through us and we’re responsible to project it, that’s all. The beauty comes from another world. We have to work, we have to rehearse, we were given the talent and the gift, but that doesn’t mean we are the creator of it.”

With his music possessing a power unto itself, Kalhor has neither the intention nor the choice to stop that ethereal flow. “[I’ll] keep on playing, until I die! Because I cannot leave music and music cannot leave me. When I’m not able to be active as a concert musician as I am now, I’ll teach more and I’ll write. There’s a young generation here that needs attention and direction, and I’m doing a lot of that whenever I can, and I will do more. But I’m staying with music. I cannot leave music, music is for life.” Together, he and his music will ensure that the renaissance of Persian classical music will not slow down any time soon.

It is for his mastery and virtuosity of the kamancheh, for his ceaseless innovation and collaboration to create exciting new musical languages, and for bringing the Persian classical music tradition to the ears of people all over the world, that we are delighted to award the WOMEX 19 Artist Award to Kayhan Kalhor.