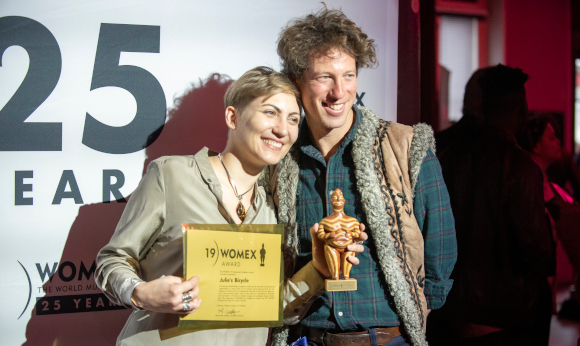 The world is burning, the ice is melting and the oceans are choking, and it’s our fault. Those that argue otherwise are not only working against humanity but against the world at large.

But all is not yet lost. We still have the opportunity to kick back against these changes to our world, and our efforts work best when we move as one community. Julie’s Bicycle is an organisation that are rallying the creative and arts sectors in shouting with one powerful voice against the environmental crises we currently face. Like most good ideas, Julie’s Bicycle came about through a meeting with friends. A beautiful utopian vision was dreamed up, ‘where festivals were powered by solar, venues were off-grid and covered in flowers, museums were community energy providers, artists were united as beacons for change.’ That was in 2006. Since then, Julie’s Bicycle (named after the location of that first meeting) have worked tirelessly towards that vision, in London (where they’re based), in the UK, and in the world. Venues may not be covered in flowers just yet, but under their diligent watch and intense work, the arts world is slowly becoming more and more sustainable.

From their very first project – a calculator for arts professionals to work out and understand their carbon impact, which has since become a go-to tool in the creative arts industry – Julie’s Bicycle have approached their task in three main ways: working with businesses individually to improve their environmental impact management; researching and developing resources for the use of all; and introducing, promoting and performing outreach for new ideas and sustainable business models. The holistic nature is not only important to making a real impact, but is one of the strongest ways that people and businesses can make a difference, says Julie’s Bicycle CEO and founder, Alison Tickell: “One thing I’ve learnt is that there isn’t a single way of doing it. We actually need to work on many dimensions all the time. But if we simplify it down, the first thing is to recognise that we can act, and then work out what we can do personally and professionally. They can be small things or big things, but they can accumulate to be quite a powerful collection of actions that are about real change. It leads to a different understanding of agency in this space. It’s this wonderful experience of giving yourself an opportunity to act, and it becomes a really exciting, deepening endeavour.”

To move and work within the music industry is often to feel disempowered when it comes to the concerns of higher powers of national governments. There is usually a disconnect between the creative community on one side and policy-makers on the other – we often speak very different languages. Julie’s Bicycle is a translator. Not only do they act to bring together many facets of the industry with one voice, they also help those in power to understand our wants, needs and demands in ways that may not be otherwise understood, or taken seriously.

The great thing is that Julie’s Bicycle aren’t just working alone. Their message has been spreading and their successes have been building and gaining influence across many fields. “Over the last six months it’s been fantastic feeling that things are changing, and I think we have been a bit of that change,” Tickell says. “We were very lucky to pick up on this one quite early on. The way we work is so collaborative, we work with everyone. We’ve been lucky that we’ve been able to gather this community.” They have played an enormous part in turning small ripples into tides of change, and this was made starkly evident in July of this year, when they, together with Extinction Rebellion and Culture Declares Emergency, launched Music Declares Emergency. This declaration reached every facet of the music industry – artists, labels, publishers, venues, festivals promoters, managers and agents – with more than 1500 signatories calling on international governments to ‘act now to reverse biodiversity loss and reach net zero greenhouse gas emissions by no later than 2030,’ as well as pledging to support, share and work towards a sustainable music industry. The work of Julie’s Bicycle is key to this goal.

For Julie’s Bicycle, outcomes are more subtle than large-scale ‘achievements.’ Instead, they are slowly, surely (and with an increasing pace) changing the way that the music industry thinks, feels and acts in regards to ecological emergency. There’s a lot there to be proud of, and it’s clear that their legacy is only just beginning. “What I am pleased about is that people are much more ready than they would have been because we have been developing the ‘how’ for such a long time,” says Tickell. “The amount of people and organisations who are ready for this moment of change and want to do more has been really gratifying. We’ve been inundated with ideas and interest, requests for help. The fact that we have been working on this for some time has given people the confidence to step into this space much more easily, and that’s been terrific.”

The work that we have at hand is to literally save the world. But we can do it. There is a lot to do, and we all have our own roles to play – especially in our own position as music professionals – and Julie’s Bicycle are here to help us. They have plenty of room to expand, too. As we all look ahead to what we can do now, and what solutions may be coming, we need to future-proof our business model as well as the world, and Julie’s Bicycle will be there with us, doing whatever it takes, at all times, to help us succeed, together.

For their forward-thinking strategies to speed up the attainment of environmental sustainability in every facet of our industry and professional lives, for their rallying of artists and arts professionals from all over the world to speak and act in one powerful group, and for their status as a figurehead in the global arts movement in the face of climate change and ecological disasters, we are delighted to present Julie’s Bicycle as the WOMEX Professional Award recipient for 2019.