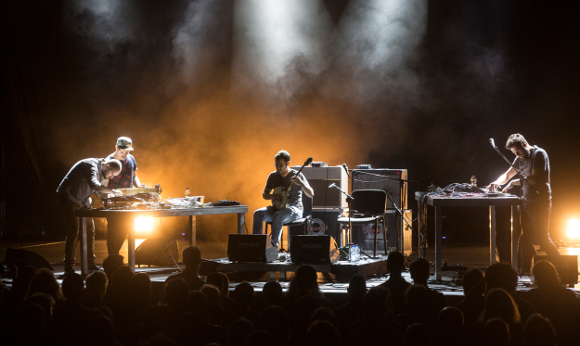 This is the sound of village halls and warehouse raves; rural fêtes and squats; past, present and future.

Super Parquet play folk dance music from the Auvergne region of central France, hallucinated through a lens of distortion, dissonance and dirty electronica. The fusion makes sense considering their line-up: cabrette (bagpipe) player Louis Jacques and banjo player Antoine Cognet both came to French traditional music as children; Simon Drouhin and Julien Baratay, the group’s electronicists, knew nothing of it before the four met. But it works because the two worlds share so much in common. Drouhin recalls the realisation: “Electronic music has the same repetitions, the same drones. We came to the conclusion that it’s the same music!”

The sounds themselves are harsh. Timbres bounce between the ears as whining cabrette grinds against sawtooth synths and twanging banjo spars with retro drum machines. Then there’s the boîte à bourdon, the ‘bumblebee box.’ It’s a hybrid offspring of a hurdy-gurdy and a shruti box that gives a continuous buzzing drone, to be tuned and detuned at will. It provides deep, complex flavours and some perfectly ear-jangling dissonances. Altogether, it creates a spectacular soundscape.

In this way, the band reclaim folk from its critics and its overbearing lovers. For them, traditions are not – and cannot be – stuck in the past, they evolve with the musicians and with society. As Jacques loudly proclaims, “traditional music is always the music of the moment.”

But talking this much about the intricacies of the music misses the point, really. “We don’t want the audience to think, we want them to dance!” laughs Jacques. Quite right. When Super Parquet play, it’s all about the atmosphere. It makes you dance, yes, but the thrill comes from the suspense. They’re masters of it. With every layer of pulsating loops and discordant drones, the tension builds and builds. The audience swims in that tension and it becomes a transcendent experience. There’s a reason so many religious ceremonies revolve around repetitive, circular chanting. On top of it all, the traditional tunes and songs of the Auvergne transport that transcended mind to another world altogether, at once past and future, city and countryside. It’s an exhilarating experience, and the band curate it expertly.

They don’t have an album just yet. They’re in the recording studio in 2018, but until then, they do have a substantial 43-minute EP from 2015 to keep you busy. If their recent reception at WOMEX is anything to go by, you can expect to see them at many festivals and concerts over the next few years – we can’t wait for our next trip to the upside-down village of Super Parquet.