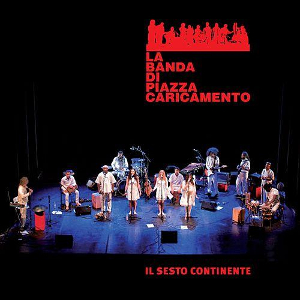 La Banda di Piazza Caricamento are based in Genoa, but the group are only Italian by location. With twelve band members, they represent twelve nationalities – from Senegal to Sri Lanka, Ireland to Iran, Benin to Brazil. That’s not even counting their many special guests.

The project’s raison d'être is to work for immigrant rights by showcasing Italy’s international cultures, and each member of La Banda brings influences from their own musical heritage. The problem is, like cooking a meal, if there are too many different ingredients the flavours will cancel each other out –sometimes there’s just too many fusions here and quite a few of the tracks feel oddly bland because of it.

The points where the album works best are actually the tracks that take the fewest influences: ‘Gnawa Genes’ features members of the Gnawa Bambara brotherhood and mixes the hypnotic Moroccan spiritual style with abstract electro-acoustics and jazz trumpet. It’s the standout piece, really showing what this group is capable of.

The group has potential. They’re on an admirable mission and their work leads to some exciting international fusions on this album. There’s just some areas where too many international colours mix and grey out as a result.
Posted by JimHxn
Email ThisBlogThis!Share to TwitterShare to FacebookShare to Pinterest
Labels: Album Review, Italy, Songlines Magazine
Newer Post Older Post Home