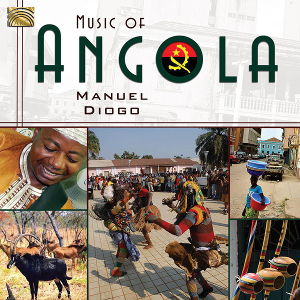 Manuel Diogo’s style is described as ‘traditional and contemporary Angolan gospel music’. In practice, this means that recognisable gospel sounds (from the harmonies of African choirs to modern R’n’B-inspired crooning) are mixed with Angolan dance music such as semba and rebita as well as with folk styles and a liberal dose of reggae here and there. The overall feel of the album is happy and light-hearted. It is very cheesy, but often endearingly so, with Casio-esque synths and drum machines aplenty, and matters of God at the forefront of most tracks.

The album has a bit of a wobble just before the end – a couple of unoriginal and uninspired international-gospel tracks with some dubious tunings – before the last track of the set gets back to form and back to Angola with a bright and soukous-like jive.

The liner notes are a little vague on whether Diogo is leading a group here or whether it’s more of a one-man-band sort of operation, but the music he creates is as unpretentious as you can get – unashamedly sunny music from a man who knows what he likes singing about.
Posted by JimHxn
Email ThisBlogThis!Share to TwitterShare to FacebookShare to Pinterest
Labels: Album Review, Angola, Songlines Magazine
Newer Post Older Post Home