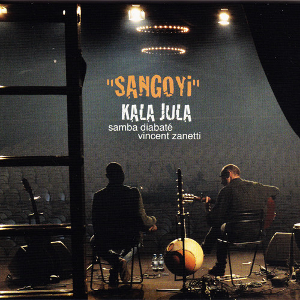 This collaboration between Malian griot guitarist Diabaté and Swiss multi-instrumentalist Zanetti is now in its fourth year, and with Sangoyi, bears its second album – the first as a strict duo.

Zanetti has worked with Sahelian music for nearly thirty years, in both West Africa and Europe, setting up a collaborative ballet along the way, and calls the Mandé lands his adopted home. This doesn’t necessarily come across in his music.

Most of the tracks contained here are unfortunately bland. Although the fusion of Malian and Western styles is pulled off quite smoothly, it doesn’t feel as if either particularly benefit from it: the music of the Mandé griots is reduced by the soft-rock folk, but the European's music doesn’t feel as if it could stand on its own, either.

When they hit into a groove, as they do in the track ‘Le Lion de Ségou’ (where they’re joined by trumpeter Yannick Barman), it seems amazing that they can keep the track from spiralling into an epic jam. It’s a little disappointing that they don’t, as these tracks finish leaving the listener wanting more.

The fact is that the majority of this album is just boring – sedate and calm enough to perhaps work well as background music, but reveals very little substance under any scrutiny…and this is even more of a shame as it containing one or two genuinely enjoyable and interesting tracks.
Posted by JimHxn
Email ThisBlogThis!Share to TwitterShare to FacebookShare to Pinterest
Labels: Album Review, fRoots, Mali, Switzerland
Newer Post Older Post Home