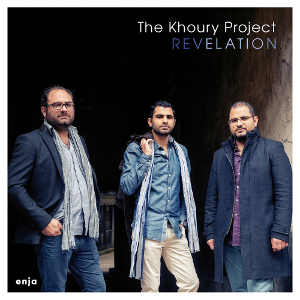 Over the past year or so, there has been a real glut of great Middle Eastern/North African jazz albums – recent records by Hijaz, Majid Bekkas Trio and L’Hijâz’Car have set the bar high. Now, Revelation by the Khoury Project can join their ranks.

The core members of the ensemble are the Jordanian Brothers Khoury – Basil, Osama and Elia – who bring violin, qanun and oud, respectively. For this project they are joined by double bass and jazz and Arabic percussion.

The elegance of the Khoury Project’s compositions is evident from the off, with the imaginatively-titled opener 'Intro' an intricate qanun solo with Arabic melody above complex chords that bring to mind ballad-jazz pianists. As the album continues, the group’s nuance becomes apparent: all the core elements of Arabic classical music and jazz are retained, meaning that their combination with each other seems so natural that at times one can forget that the traditions are from opposite sides of the world.

There are also other themes explored throughout the album, with a couple of pieces reflecting flamenco (especially their version of Paco de Lucía’s 'Zyryab', recorded live in Paris), and these additional influences are handled with ease. It’s a difficulty to pick a highlight from this record, the pieces are consistent and all seem to have equal value to the album as a whole.

Is there something about Arabic music or jazz that make their fusions so often successful? It just seems to work. Take nothing away from these musicians though: it is a combination that requires knowledge of many musical languages as well as virtuosity, and Revelation is another great example of this.
Posted by JimHxn
Email ThisBlogThis!Share to TwitterShare to FacebookShare to Pinterest
Labels: Album Review, fRoots, Jordan
Newer Post Older Post Home