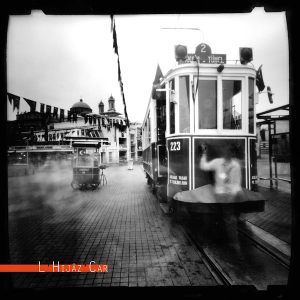 Okay, let’s get this clear right at the beginning: this album is probably the best I’ve heard so far this year. L’Hijaz’Car are a French quintet that cast a modern-day jazz eye over the Middle East, mixing Arabic, Turkish and Persian classical music with jazz that wanders between the mellow and brooding to the far-out and the very nearly free. Although the group have been playing since 2000, this eponymous album is their first widely-available release without a solo vocalist – and it’s well worth the wait.

The instrumentation of the group is unusual but inspired. The double bass is the only ‘traditional’ jazz instrument and it’s joined by oud and Arabic percussion which add to the band’s Eastern credence. It’s the other two instruments that take the ensemble into rather uncharted territory. The versatile tarhu spike-fiddle sounds anywhere between a frenetic violin, a soulful cello and a haunting duduk oboe, and the group is completed by the oft-overlooked bass clarinet. This instrument is perhaps the most striking sound on the album and its timbre suits the music to a tee: more domineering than the standard clarinet but with a fragility that a saxophone can’t provide.

Throughout L’Hijâz’Car, all five musicians show their prowess as soloists while still being able to join together in composed sections seamlessly, with unexpected but perfectly timed squeaks and honks, deliciously jarring dissonances and eerie, almost anguished pauses. It’s hard to pick any specific highlights from this seven-track whole, but 'We All Scream for Ice Cream' has a corker of a tarhu solo (don’t get to say that very often) and 'Igor Noir' sounds as if it could accompany a film noir spy sneaking around before infiltrating a salsa night in Damascus.

Really, this is just a superb album, and one that I’ve not been able to stop playing since it came through my door. Give it a listen, and you may find yourself subject to a similar fate. Lucky you.
Posted by JimHxn
Email ThisBlogThis!Share to TwitterShare to FacebookShare to Pinterest
Labels: Album Review, France, fRoots
Newer Post Older Post Home