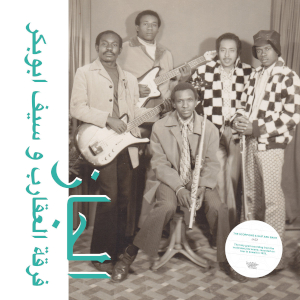 Jazz. Jazz? Jazz! Jazz. Well, except, not really. Barely any jazz at all, actually. Funk and soul definitely, and more besides, but jazz…not so much.

This record by Sudanese band the Scorpions with singer Saif Abu Bakr was originally recorded in 1980 in Kuwait. It’s since passed into a degree of legend among record collectors, with copies going for up to $1000 on eBay. Now Habibi Funk has reissued it for those of us without such expansive purses.

The album starts with a couple of instrumentals, but it really gets going when Abu Bakr joins in. His voice is full of personality and gives a good contrast to the tightness of the band’s groove. But yes, for all the title’s talk of jazz, stylistically there’s much more funk than swing, and it even drifts into Motown territory on occasion. There’s not that much to mark the music as Sudanese, either. Apart from the vocals and a sometimes pentatonic feel, the record could have been made across the Atlantic. In fact, the track ‘Bride of Africa’ wouldn’t have sounded out-of-place in 70s Kinshasa; it’s a lovely take on rumba Lingala.