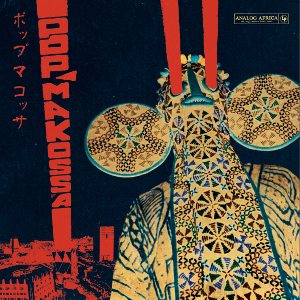 Makossa united the tastes of a divided Cameroon, not least because it was a musical style that could bend around almost anything the country’s musicians threw at it. From super-tight funk to full-on drum machine and synthesiser disco, makossa embodied it all. There were also healthy doses of rumba thrown into the mix, the Congolese influences plain to hear.

The focus of Pop Makossa – as with many releases from Analog Africa – is on rediscovery. The album presents the lost hit-makers from the genre’s defining era, who have too often fallen into obscurity – sometimes out of choice, sometimes not.

This album does a good job of spanning the diversity of the style, and even includes some gems that have never seen an official release, such as Dream Stars’ ‘Pop Makossa Invasion’, a piece recorded for a radio station and promptly forgotten until now. The accompanying booklet is also filled with great stories of the artists and the Analog Africa crew’s adventures in tracking them down.

A clue to the popularity of makossa is in its name: the word means ‘I dance’ in Duala, and when you listen to this compilation, you won’t be able to argue with that.
Posted by JimHxn
Email ThisBlogThis!Share to TwitterShare to FacebookShare to Pinterest
Labels: Album Review, Cameroon, Compilation, Songlines Magazine
Newer Post Older Post Home