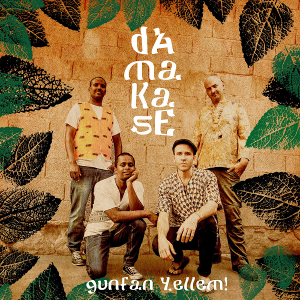 ‘East meets West’ is a common theme within world music fusions, but it’s rare to hear one like this: Damakase’s sound arrives from the blending of Ethiopian and Malian styles. The heart of the band is the collaboration between masenqo (one-string fiddle) player Endris Hassen and guitar and banjo player Cory Seznec (a Franco-American musician who lived in Ethiopia for several years), and their chemistry shines through.

The track ‘Wassorai Asho Mada’ is where the combination is smoothest and most complete. The groove is Mali blues, the beat is Ethiopian, and Hassen’s masenqo jumps between the two, exploring the realms of its West African cousins such as the soku, without ever leaving Ethiopia behind.

That’s just one example of the group’s intelligent and creative use of instrumentation. They’re everywhere: in the Ethiocentric tracks, gourd lute and ngoni take the place of the traditional krar, and there’s some fun bluegrass interplay between banjo and masenqo elsewhere.

Damakase have hit on a great fusion here, with Ethiopia and Mali both having their own very distinct and popular musicalities. The combination has fruit ripe for picking and the group do a good job with it. One wish for the next album: it would be great to hear some West African musicians involved too.
Posted by JimHxn
Email ThisBlogThis!Share to TwitterShare to FacebookShare to Pinterest
Labels: Album Review, Ethiopia, Mali, Songlines Magazine, USA
Newer Post Older Post Home