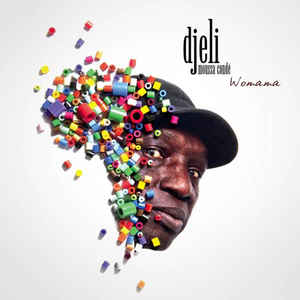 Hailing from Guinea, living in Paris and with spiritual roots in Mali and Gambia, Djeli Moussa Condé’s experience is one that will be familiar to many West Africans (especially griots) living in France. As such, the music on this, Condé’s second solo release, reflects himself as a citizen of many countries. Condé provides lead vocals, guitar and kora backed by a French band and with several West African guest musicians. European influences sit next to and within the West African styles easily, and the album journeys through reggae, jazz and funk without ever leaving the Mandé influence behind.

The album is strongest during its more Latin phases, such as the tracks ‘La Salsa Africana’ and ‘Palma’ (an ode to the Balearic city), and the disco Afrobeat piece ‘African Bond’ is great fun, managing to be both cheesy and extremely funky at the same time.

There are no weak tracks on this album as such, but there does seem to be a fair bit of filler: pieces that are listenable but essentially unexciting. Nevertheless, this is a good album, and the stand-out tracks are worth wading through some of the less interesting ones.
Posted by JimHxn
Email ThisBlogThis!Share to TwitterShare to FacebookShare to Pinterest
Labels: Album Review, Guinea, Songlines Magazine
Newer Post Older Post Home