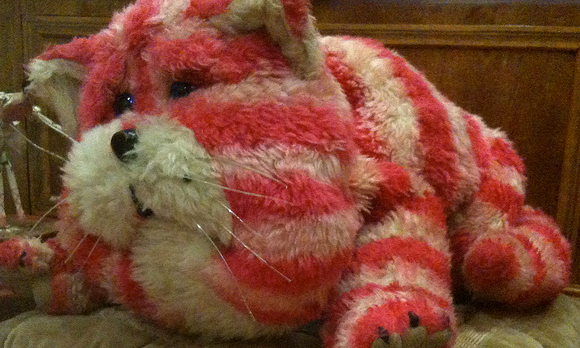 Oliver Postgate is arguably the king of children’s television. His shows such as Ivor the Engine and The Clangers are rightly held as classics, but probably his most fondly remembered work was a series of stories about an old, saggy cloth cat named Bagpuss. The music in Bagpuss was integral to the show and the English- and Scottish-style folk songs brought with them whimsical tales of such characters as Uncle Feedle, the ragdoll with an inside-out house; and the porcupine who sailed around in a balloon.

Indeed, it was these original songs and stories that were performed at London’s Cecil Sharp House for one of their family folk events. The concert was presented by the Marvellous Mechanical Mouse Organ – which comprised of the original composers and performers Sandra Kerr and John Faulkner, alongside Sandra’s daughter Nancy Kerr and her partner James Fagan (themselves a rising folk duo).

The musicians performed perfectly for their target audience, each taking on the role of a character from the TV show and encouraging all the little mice in attendance to sing, dance and clap along (which even some of the older mice couldn’t resist) as well as holding their rapt attention throughout some of Postgate’s wonderful tales.

All in all, it was a lovely afternoon of music and storytelling, and it’s encouraging to see a roomful of young children having fun and enjoying folk music. Some even knew all the words to the songs already – the next generation of folkies are starting early!