First published on Musika.uk.com in November 2012. 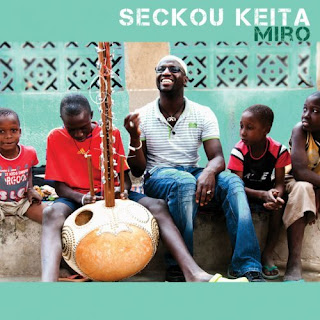 Senegalese kora (harp-lute) player Seckou Keita here presents his fourth solo album, Miro, featuring many musicians who were involved with Keita’s Bantamba Syndicate project, which was presented as part of the BT River of Music festival in London earlier this year.

The album’s first track ‘Rewmi’ (a Wolof word meaning ‘country’) was a hit in Senegal before the February presidential election which saw the end of Abdoulaye Wade’s 12-year premiership. Whether the track (which calls for peace and beckons listeners to fight disease and hunger) had a hand in this result as the album’s press material seems to suggest is another matter, but the piece itself is a strong album opener – the interplay between Keita’s kora and Cuban bassist Michel ‘Pata’ Salazar is tight and an effective accompaniment to the vocal harmonies of Binta Suso and Mariama Kouyate.

Unfortunately, after this promising opener, the album seems to settle into something less exciting. Seckou aligns himself with the griots lineage of his mother (a Cissokho) rather than the royal heritage that the name Keita implies, and sees Miro as an attempt to “step back towards [his] tradition”. However, in practice, the album seems tempered towards European tastes and ideas of what makes ‘world music’ and as such seems to assume a fairly middle-of-the-road sound dissimilar to his previous albums of slightly more challenging, and thus more interesting, music.

Which is not to say that the album lacks its standout tracks, however. Aside from ‘Rewmi’, the highlights for this reviewer are incidentally the most stripped-back pieces on the album, both featuring Keita’s kora as the only instrumentation, helping to showcase the talent of guest singers. The track ‘Tara’, a traditional Mande piece, is given a new edge by the soul-inspired vocals of Ivorian singer Mohamed Diaby. Diaby also features on the track ‘Hino’, but defers lead duties to Spanish singer Inma La Carbonera. This Mande-flamenco cross-cultural collaboration is perhaps the album’s most effective track, La Carbonera’s voice aching beautifully in front of the kora; it’s also where Keita is at his most innovative, having had to adapt a new kora tuning to be able to play in the flamenco style.

Miro certainly has its moments, but a seeming lack of decisiveness between a fully-traditional sound and a Western-market friendly release leaves many disappointing tracks in between, meaning that the album perhaps lends itself more to the pick-and-choose ideology of digital downloading than a purchase of the whole album as a piece of art in its own right.
Posted by JimHxn
Email ThisBlogThis!Share to TwitterShare to FacebookShare to Pinterest
Labels: Album Review, Musika.uk.com, Senegal
Newer Post Older Post Home